How Ireland Is Quickly Becoming The Richest Country In The World ⇅


#united kingdom #economic policy #tax haven ireland #tax paradise #Education
If you were to take a look at the wealthiest citizens in the world in the 1980’s, you would have seen the tax havens like Monaco, Switzerland and Luxemberg, at the top of the list, you would have seen economic powers like the united states and Germany at around 13-14th richest. And all the way down at number 28, past countries like Greenland, New Caledonia, and Andorra, would be the country of Ireland..
But today, That list looks a little bit different. As Ireland now has the 4th largest GDP per capita in the world, and of countries with over 3 million people, Ireland is the 2nd behind only Singapore.
But it wasn’t always like this, you see, Ireland just 100 years ago was considered by many to be a third world country..
In the 1920’s, greater than 90% of Irelands economy came from agriculture, and most of its working population was composed of poor farmers. And after Ireland gained its independence in 1922, it only had one trading partner, which was the U.K, and virtually all of Irelands exports were Beef and Dairy.
Now at this point, Ireland was falling behind the rest of the world in regards to its economy and technology. So it decided to try a new economic policy.
The Irish saw that during the great depression, the countries that were being hit the hardest were the ones with a free market. Meanwhile, countries under communism such as China, and the Soviet Union were actually experiencing economic and industrial growth during this time.
So…the statesman Eamon de Valera decided to take some of the ideas from the communist regimes. Ireland soon nationalized and monopolized a large portion of its economy, it banned most foreign investment, and put high tariffs on all goods from other countries.
These policies were supposed to make the country self sufficient, and help rapidly industrialize the nation. But that is not what happened.
You see, the first thing that happened after these economic policies were put in place was that the Irish began leaving the country at faster rates than they were before. In fact between 1840 and 1950, the population of Ireland went from 8 Million all the way down to 4 Million. Although the potato famine of 1845 played a role in that as well.
The second thing that happened was that the Irish policy makers ran into a problem. You see, in order for a country to become industrialized, they need all of the resources required to build things like factories, ports, and modern buildings. And for large countries with tons of resources like Russia and China, that was not much of a problem.
But for a country like Ireland which is 0.49% the size of Russia and 0.88% the size of China, this would prove to be troublesome for the small European nation. And even if Ireland were to be abundant in all required resources, it would have been very difficult to build an industry around each one of those resources because Ireland’s population small…and less than that of some cities like New York and London.
One interesting note is that because the Irish took some of the ideology from the west and some of the ideology from the east, it actually was one of the very few countries that stayed neutral during world war 2.
Anyways, over the next several decades, the nationalistic economic policies would prove to be disastrous for the Irish economy, as there was very little economic or industrial growth during that time compared to the rest of the European world.
So…as virtually all communist countries have done…they decided to change their economic policy.
In 1957, Ireland began accepting foreign investment, they slowly began opening up more to international trade, they started investing heavily into education, and they began selling off many of their state owned companies.
in 1973, Ireland joined what would become the European Union, and this was viewed as the beginning of Ireland becoming a modern economy.
However, things took a little bit of a turn.
You see, a combination of an oil crisis, uncontrolled government spending, Bank strikes, and extremely high taxes, upwards of 50% for the average person, led to one of Irelands worse economic downfalls in its history..
End of transcript. too long for description.
Discord, https://discord.gg/qJEFsG
My Gaming Channel: https://www.youtube.com/channel/UCzuUsoqUOXul8aRcl2ZwyNA
Want some Advice? Ask Me on Reddit!.
https://www.reddit.com/JackChapple/
My Personal Youtube Launcher Course
https://jackchapple.mykajabi.com/YTL
My Personal Investing Course, https://jackchapple.mykajabi.com/SMM
Personal, On Tik Tok: jackchapple
On Reddit: https://www.reddit.com/JackChapple/
On Instagram! https://instagram.com/jack_chapple_real/
On Twitter! https://twitter.com/JackChappleSci
On Facebook! https://www.facebook.com/ChappleREI/
CONTACT, For Collaboration Inquiries ONLY: jackchapplevideogmail.com
Podcast: 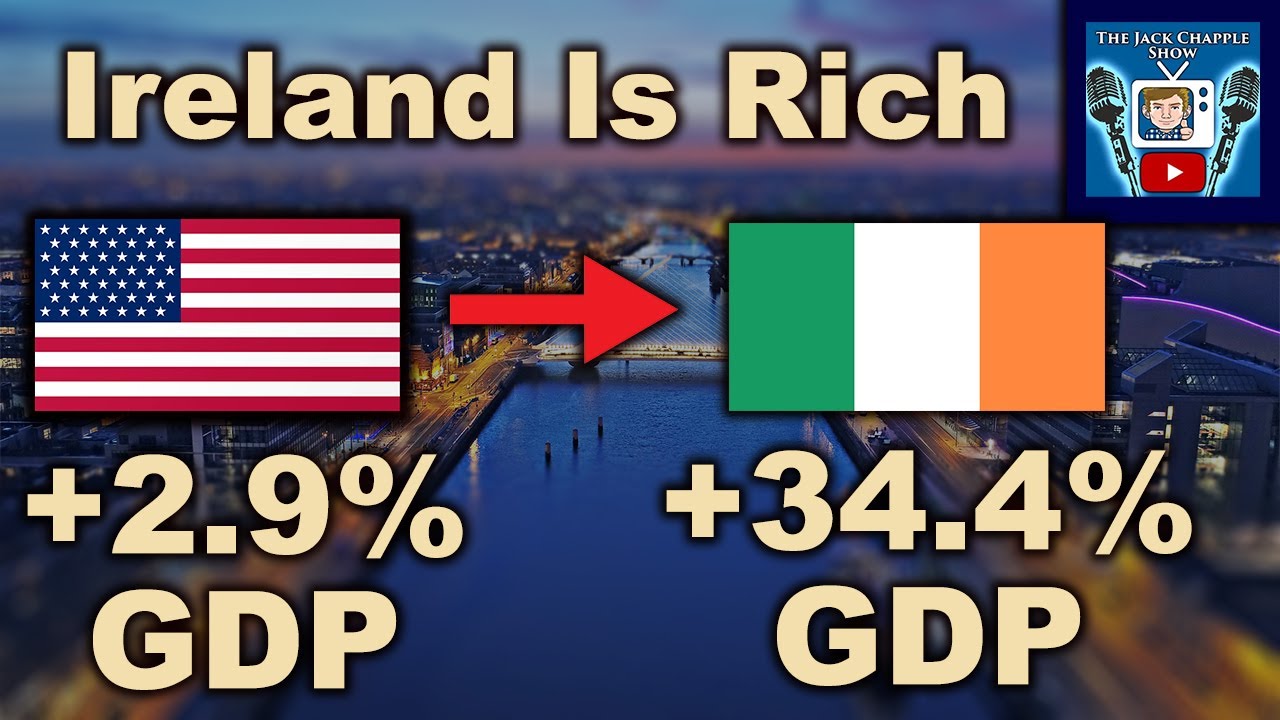 Hey Everyone! Wow we are at 326K!!! Ahhh I love you all! So..for this video...THERE WAS A TON that I had to leave out about Ireland, its history, and its economy. I am trying to keep my videos to under 12 minutes, and my full video would have been probably 18-20 mins. So If I left anything out, i'm sorry, and maybe leave a comment with what you thought about this video

by Jack Chapple 3 months ago

Can somebody tell my bank account that I'm living in one of the richest countries in the world, it doesn't seem to have caught the message

That is the single worst pronunciation of Eamon DeValera I've ever heard!

by God Is In The Details 3 months ago

Investments are becoming Ireland's major source of income.
It has really boosted the nation's economy thereby making it the richest

by Edward Jason 4 days ago

As an Irish man all I’ll say is this is absolute nonsense.

by K Mc 3 months ago

Might as well talk about Qatar being the richest country in the world. While 90% of the population are slaves and lives on a few dollars a day.

In the past, Agriculture held a huge percent of Ireland’s economy. Trading was neglected as UK was the only trading partner therefore Ireland fell behind during this time
New ideas were generated and implemented in the country such as trading and investments, investors hold the top sectors hemisphere of the riches of Ireland today. This is one of the major reasons why to save and invest in trades like forex is mandatory.

by Jessy miller 1 week ago

"The potato famine had some to do with it". That's the understatement of the year.

by asdf 2 months ago

Don't be fooled. The people don't have this money. It just sits in the accounts of corporations dodging taxes

Biggest problem in ireland now compared to years ago, is the huge cost of buying a house and the cost of rent. Tens of thousands of people cant get a mortgage and are sometimes paying half their bloody salary on rent. If you had any contacts in ireland or other countries, your videos would be more accurate.

by susan kenneally 3 months ago

"Ireland is rich" emphasis on the country not the people.

by Chris Smyth 3 months ago

by HappyDays123 2 months ago

Damn, I must be imagining all the homeless

by Sassy 2 months ago

This can only be described as historically ignorant nonsense.

The political reality at the time was that the Irish Free State was only 17 years old, and the scars of the Irish Civil War were still bleeding.

Politically, there was ZERO chance that De Valera was going to go to war on the same side as the UK, especially when you remember that we had fought a war of independence against the UK within living memory, and most of our leaders had been personally involved in the independence struggle...

The neutrality policy was very popular, and was supported by nearly every politician in Dáil Éireann.

Ireland is just a shell corporate haven for the greedy elites. The greedy rich are no better then communist dictators.

by Mig Mo 2 months ago

by Brian F 3 months ago

by Official R.O.F 2 months ago

by Jacksil Jackson 3 months ago